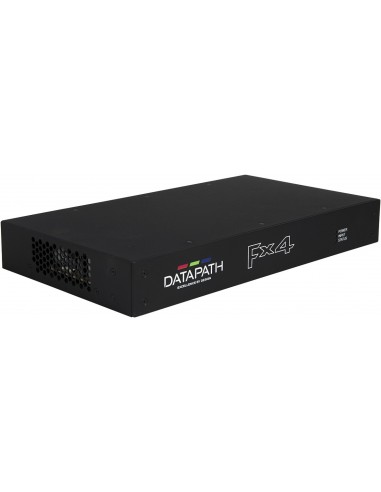 Datapath Fx4 / D - Multidisplay processor for videowall. It supports complete correction of the monitor frame both in height and in width for any type of display. Ideal for generating the overlap area of edge-blended projectors. Compatible with Mac OS X 10.6. Splits a single DisplayPort1.2 input or 2 HDMI1.4 inputs, respectively with 4k 4096x2160p resolution at 60 fps or UHD 2160p at 30 fps, into four independent DisplayPort 1.1 outputs (1080p / 60 or equivalent up to 165 MP / s). It allows the connection in cascade of several units via DispalyPort 1.2 and remote control and programming via TCP / IP. Genlock entrance. 36 months warranty.